You know how sometimes you see someone, a stranger, and without meaning to, you imagine that whatever they’re wearing and whatever car they drive are the things they have chosen out of all possible options, that these things say something meaningful about their personality and their life? And then you look at yourself, your car, and maybe your clothes, and realize how many other circumstances played a part? I feel like we who make our own wardrobes move slowly (slowly, please cut yourself some slack, it’s going to be a process) towards the point where at least for what we wear it’s true: our clothes say exactly what we want them too. (My car is another story, I don’t know about yours. It does say that I would rather duct tape the mirror back on and buy better food than other possible options …)

This sweater feels like a step towards what I want to say with my knitting. It’s made with Mountain Meadow Wool (they’re a woman-owned company using US wool from the West, committed to eco-friendly practices) in a sheep-grown color (“natural dark gray”) which I love. I feel like the message that real wool is beautiful and good comes through, even if you saw me and assumed I bought this sweater (although if you saw my car you’d know I couldn’t afford it). You can also see that I love texture and value detail, and hate being cold.

I’m pretty sure this was supposed to be my One Year, One Outfit project for 2016. I started planning it in late 2015, started knitting as spring came around, and brought it with me on the road last summer, but it took until this spring to finish. This was a long knit for a whole lot of reasons. The textured stitch patterns just take longer; there was more stopping and checking and thinking than with plain stockinette or one pattern all over. Sweaters are big, and pretty soon I wouldn’t necessarily take this one everywhere I went. Making something only loosely “inspired by” a pattern (the Cotswold Henley by Meghan Babin) takes a lot of thinking, and measuring, and planning, and sometimes ripping out and knitting again. All totally worth it, but time consuming, and sometimes I ended up not knitting because planning the knitting was daunting and I was too tired or overwhelmed.

When we got home in the fall, I really wanted to keep making progress on it, so at first I decided I would work on the sweater before bed, instead of spinning, until the sweater was done. I love spinning before bed, and it has to be said that I did not love knitting the sweater during that time as much. Sometimes I would just skip it. After a while I realized that, although I’m not the kind who likes having a bunch of projects in progress, this was a false choice—it’s actually healthy for me to have a little knitting and a little spinning going on at the same time. I also realized something about how I like to work that I kind of already knew; knitting is an “and” activity for me. I love knitting while traveling, knitting while hanging out with friends, and knitting at meetings, but I really don’t love sitting quietly by myself and knitting. I’d rather do something else with that time. So I went the other way; I started spinning at night again, and hauling an extra tote bag full of sweater-in-progress with me to social events and anywhere else I could see that I might have some down time. That worked much better, and before long the sweater was actually done! 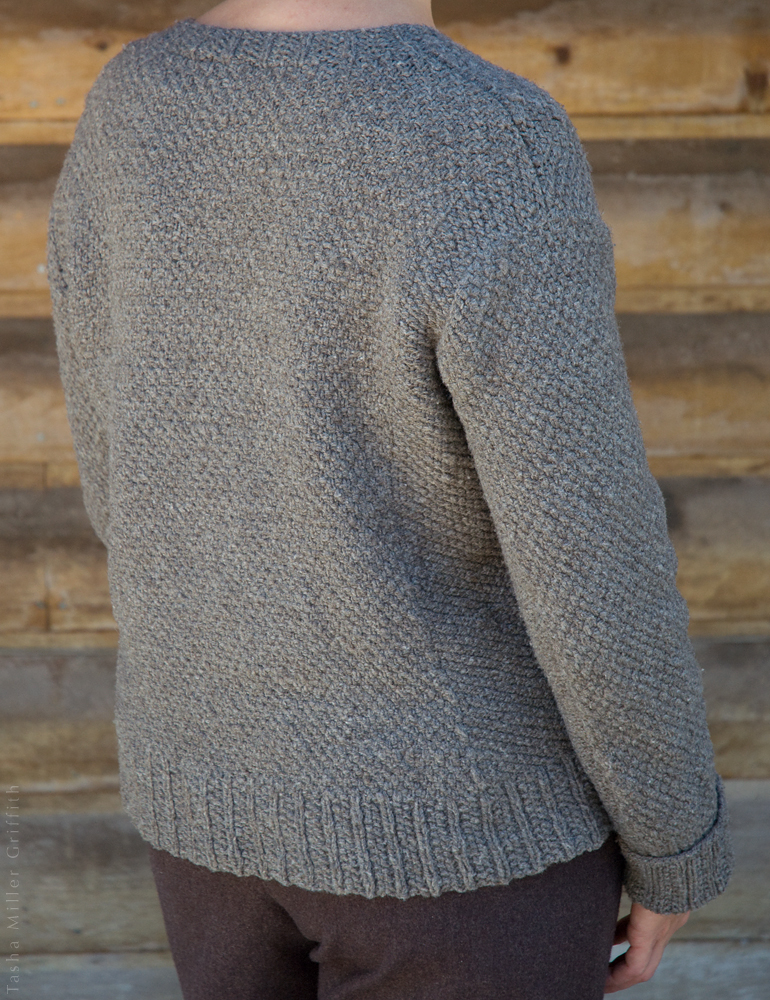 I believe that it’s done and that I knit it, but I’m having trouble believing that I get to keep it, if that makes any sense. In other words, I got pretty much exactly what I wanted. Of course there are a few things I’ll change in the next version, but there always are. I’ve decided that just shows that I’m still on a journey.

I started wearing it as soon as the last seam was sewn, and it went on quite a few outings this May, and into June in our variable mountain weather. The yarn has pilled some, but I’m hoping that how brilliantly it held up to being ripped out and re-knit (ahem) multiple times in certain sections means that the pills will be temporary and not terminal. I drafted Bryan to take the photos of it on me on the last cool day we’re likely to have until fall, and then carefully packed it away. Getting it out when the weather turns again is going to be such a treat! 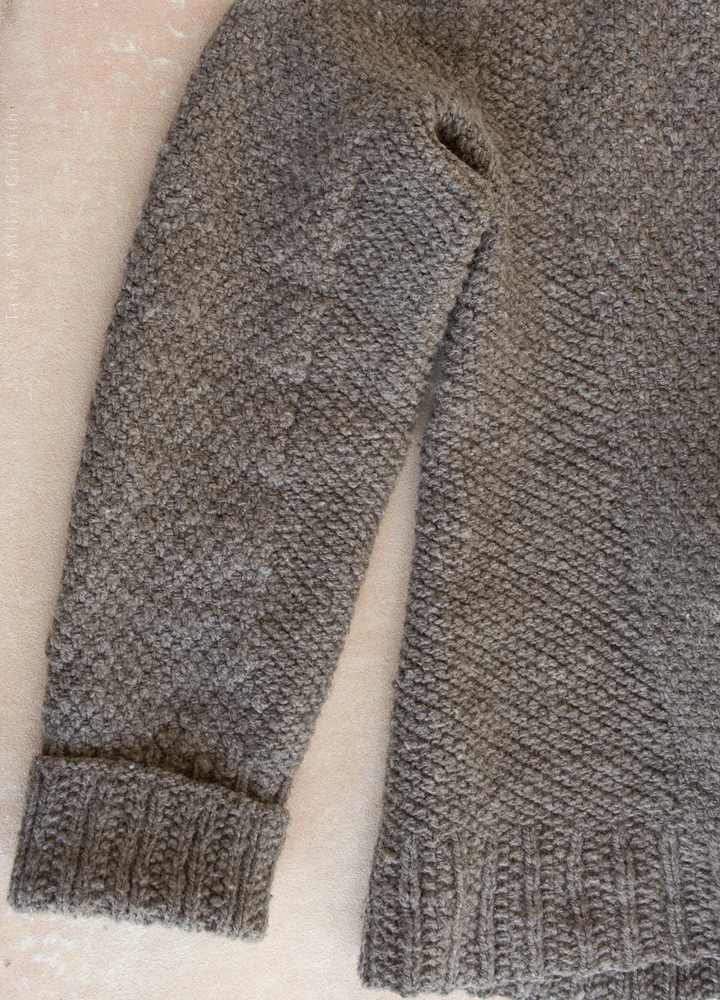 There are two different stitch patterns, but they’re hard to see unless you’re really looking. I possibly should have gone with something bolder/more contrast, but then again subtle is my jam …

A few knitting notes: I wanted this to fit over my thickest winter shirt/sub-sweater (I hate being cold). I used Karen Templer’s idea of in-the-round “seams”. This is seriously brilliant as far as I’m concerned. Knitting seems so perfectly adapted to be made in the round, to be shaped organically, to be seamless, and I’ve never been willing to give all that up for the structure that seams can add. Now I just might get both! I made a pretty detailed/extensive chart of measurements for various sections of the sweater when I was planning where the “seams” would go and how big the whole thing should be, based on trying on an old sweater and marking it with pins. I’m really looking forward to having that chart and this sweater for planning future sweaters. I’ll be able to look at them and compare pattern measurements and know how big I want the sleeves, or how wide across the shoulders, etc. 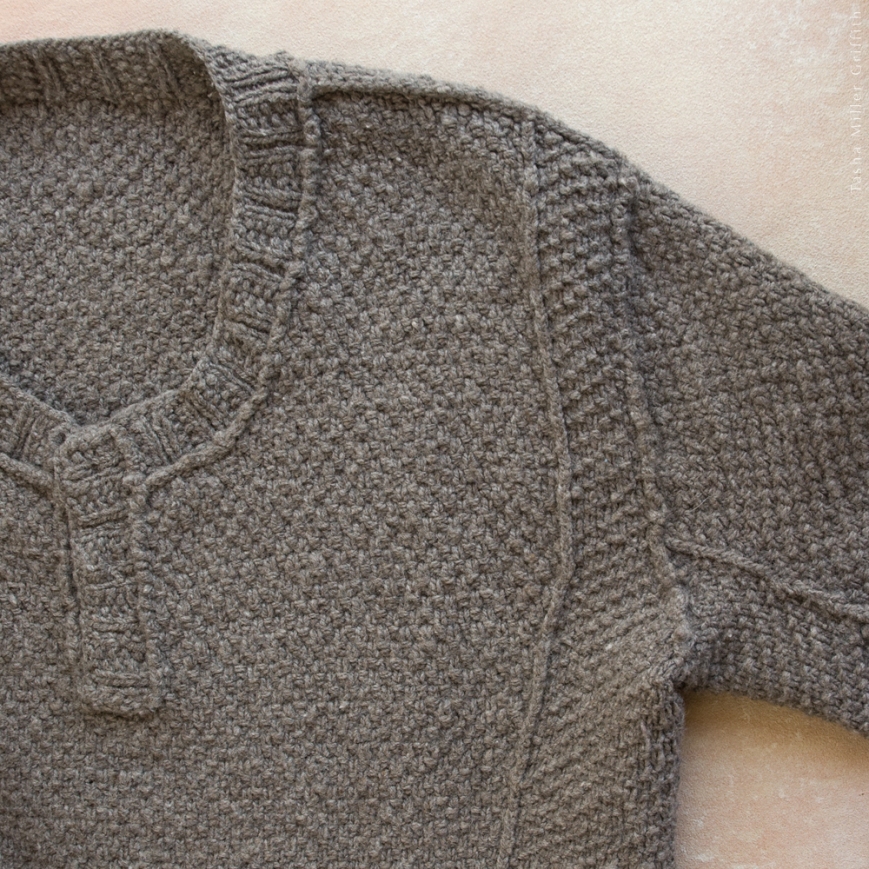 Guts: Picked up stitches around the neck/placket, and where the sleeve joins the body. “Seams” closed with mattress stitch between the two stitch patterns vertically in the body, and horizontally near the bottom of the sleeves.

For now, I’m enjoying knitting socks in spare moments. Compared to this sweater, they seem to appear instantaneously! I have a pair almost done already. I think the speed is mostly due to the “and” factor; socks are really suited to occupying my hands while other things are going on. They’re small enough for me to keep the whole project in the bag I usually carry, and I purposefully kept the stitch patterns simple enough that I can keep track without needing to refer to a pattern most of the time—which also means I don’t have to stop much for deep thinking. I could really use some new socks, so I may just make a few pairs before settling down to anything big and complicated again.

I’d love to hear any thoughts you want to share about big versus small projects, or crafts you like to do on your own in a quiet space versus things that are good for groups and busy times, or where you are in your journey of what you’d like your wardrobe to say …