Apparently, it took me all the time since pine nuts were suddenly out of my price range (years!) until this year to figure out that pistachios are the pesto substitution nut to beat all others.  I’m amazed.  It’s so obvious once you taste it. 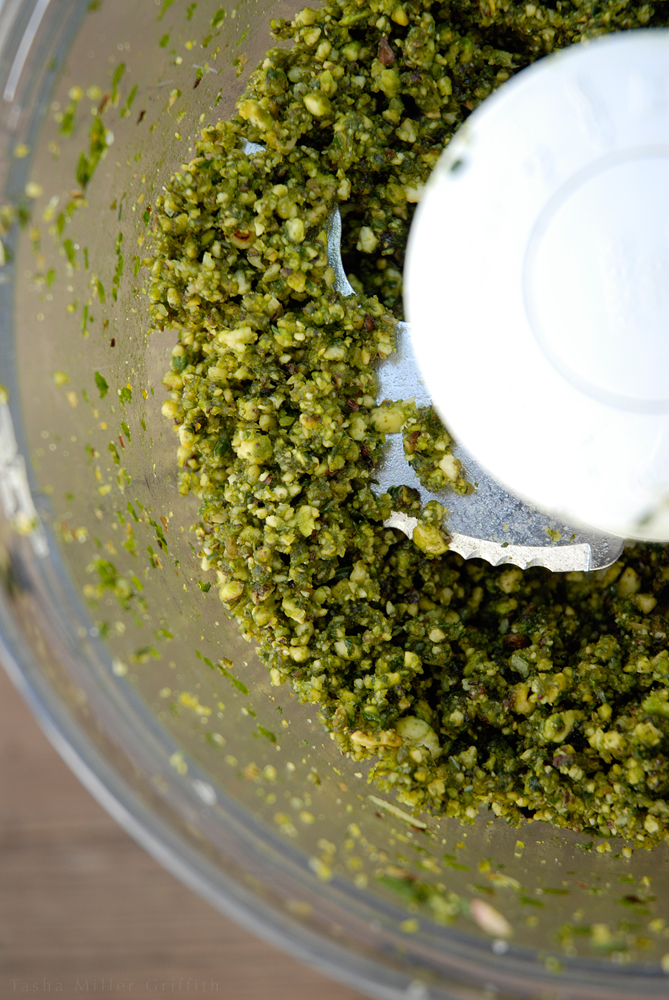 It also took me a little while (but not nearly as long) to nail down some quantities for this recipe.  I get in this funny mood sometimes when I’m cooking by taste, where I just want to, um, cook by taste.  Any attempt to quantify what’s going on feels like an unwelcome intrusion of thoughts that might be interfering with my creative process. It’s funny because I’m also a fairly obsessive note-taker.  I guess it’s just hard to take the notes at the same time I’m making the thing … in any case, I tried a few times, and finally got it close, I think.

The worst that could happen is that you’ll also need to make and eat a few batches to nail down the proportions you prefer … that’ll be terrible I’m sure.

Makes about 4 servings, enough for each person to have on top of ratatouille (which is fabulous!) or pasta.  Any leftovers are delicious just spread on bread.

I’m convinced that the food processor was invented by someone who needed to make big batches of pesto in a hurry.  It pretty much the perfect tool for this.  Combine in the bowl:

A sprinkle of black pepper

Process until you get close to the texture you want.  Taste and adjust.  I usually end up adding a little more olive oil partway through, even though I prefer it slightly chunky and not too oily.  I find it salty enough from the cheese, but of course you can also add a little salt if you like.  I predict that if you try it, you’ll be converted, the taste is worth the shelling! 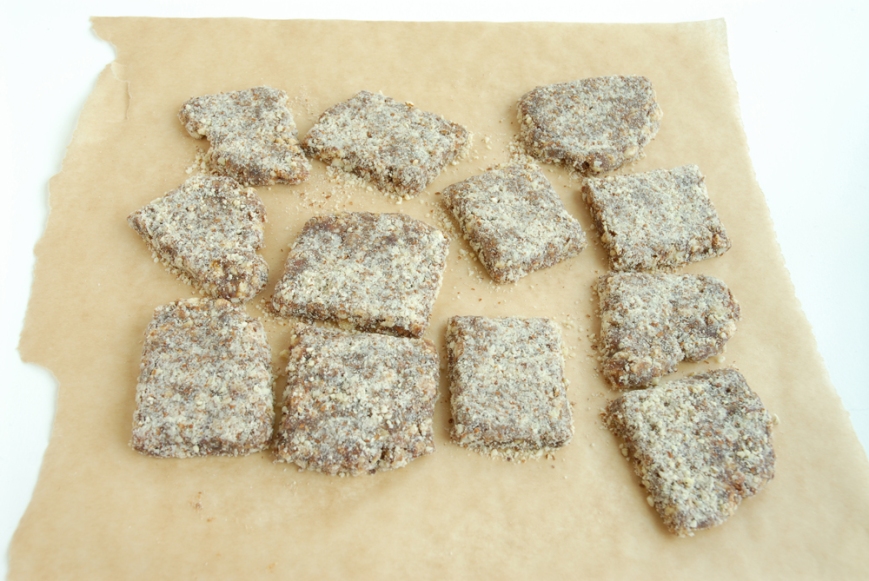 We’re headed to our next art show today (Brookside in Kansas City, MO) and along with my usual motley assortment of library books (shhh) and projects in progress, I’m packing two versions of these bars!

We eat a lot of Clif bars, Odwalla bars, Larabars, regular old granola bars, etc. for breakfast when we’re in the truck.  By the end of the summer if I never saw another one it wouldn’t bother me, with the possible exception of the Larabar type.  There’s nothing in those besides dates, nuts and spices, and of course they are also the most expensive kind, I usually don’t buy them unless they’re on sale.

This winter on our trip to Oregon I was sitting with our friend Becca when she came up with a brilliant idea – why not make them?  She was eating a bar made at the lodge where we were, which was mostly chunks of dried fruit and nuts held together with honey.  This seemed like such a good idea, and of course so obvious once she said it, it lodged in my brain and fortunately stayed there until I tried it out.

The first version had more dates, and fewer almonds, with none reserved for coating the outside.  It was good, but sticky, and even a little too sweet, despite the fact that there’s not any added sugar.  Here’s version 2:

Add 8 oz dried, pitted dates to a saucepan in which they barely fit in a single layer.  Grate on top: zest of one orange.  Pour in enough water to make about 1/8″ in the bottom of the pan, just enough so that all the dates have some to soak up.  Bring the water to simmer, then turn off the heat, cover the pan, and leave it for about half an hour, until the dates have soaked up the water and become soft and plump.

Grind 1 cup raw or toasted almonds to a coarse flour with some chunks remaining.  Grind a further 1/4 cup to flour without chunks.

Put the soaked dates in the food processor, and chop/grind until you have a thick puree.  I added a splash of Amaretto to the processor, totally optional, but adds a nice extra flavor.

Scoop out the date puree into a bowl or back into the pan, add the coarsely ground almonds, and mix together into a thick paste.  On a cutting board or parchment paper, sprinkle out about half of the almond four.  Scoop the date/almond paste on top of the flour, sprinkle more almond flour on top of it, and roll out like you would cookie dough to your desired thickness, using the almond flour to keep the bars from sticking to the surface or the rolling pin.

Cut into bars, use the extra almond flour that falls off to coat the edges, let dry for a few hours, and you’re done! 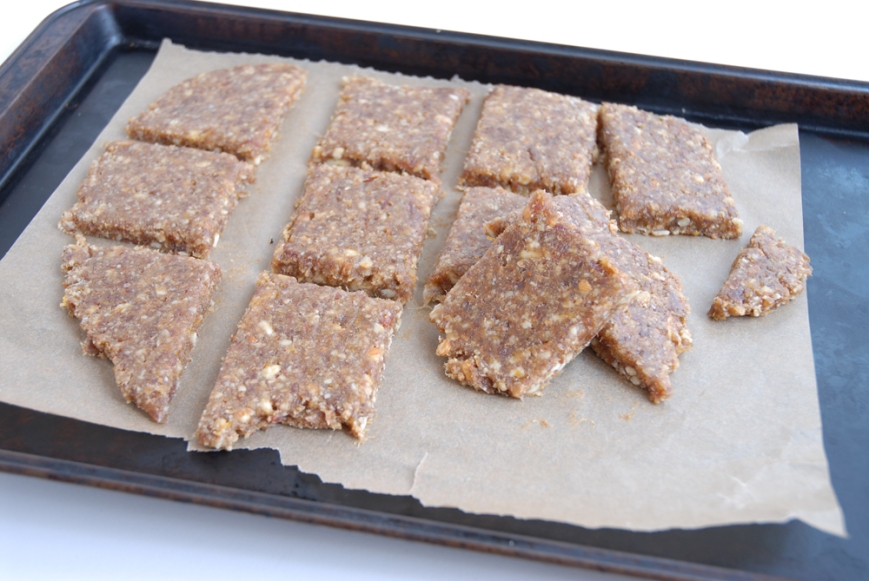 Seeing as how I was making my own fruit and nut bars, I also bought some figs, and made:

Using basically the same procedure as the date and almond ones.  I needed to cut the stems off the figs, and they weren’t quite as juicy or sweet as the dates.

Add 12 oz dried figs (I used black mission), a little orange zest, about 1/3 of the orange (lemon would also be nice here), 1 Tablespoon of honey, and just a little water as before to the saucepan.

After soaking, there was still a little liquid left, so I brought the pan to a simmer again and boiled it off just for a minute or two, stirring, until it was more like a thin syrup that stuck to the figs.

When I was writing this up yesterday I forgot that I had used slightly fewer pistachios than I did almonds in the date bars, about 3/4 cup in the fig bars, but still 1/4 cup ground to dust the outsides.  This seemed to make sense because the figs were a little drier, and also because I ran out of pistachios!  Of course you can vary the amounts to your own taste and see what you like.

From this point process the figs and grind the pistachios just like the above recipe.

Maybe my favorite thing about this idea is that if I get tired of one kind, I can just add another variation, some spice or a different nut for a new flavor!  I’d love to know your thoughts, what flavor combos would be good?  If you try your own, how did they come out?