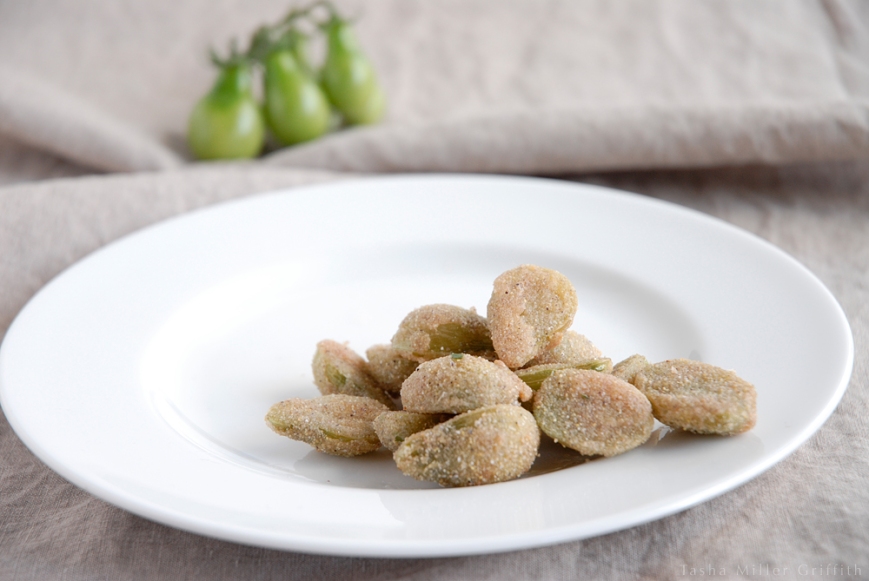 But why, you may be asking, should I fry green tomatoes?  That was my question too, until we got some from our CSA a few years ago and I tried this for the first time.  The short answer is: they’re delicious.  For a slightly longer one: in our mountain climate, an early freeze is pretty much inevitable in the fall, which greatly increases the chances that my friends and neighbors will give me tomatoes picked before they had time to ripen.  They will get a little riper on the counter in a paper bag or wrapped in newspaper, but they’ll never be the same as they would be on the vine. When fried, the green tomato flavor completely changes, and a crunchy cornmeal crust is a wonderful compliment to the tart soft insides.

adapted from The Joy of Cooking

Mix together in bowl for the coating:

Seasonings you like: a little bit of salt and pepper, seasoned salt, fresh thyme and/or Cajun spice mix . . . anything you want to give the batter a little extra flavor.

If you don’t have these exact ingredients, don’t worry.  The mixture of fine ground (masa) and coarser cornmeal seemed like a good idea as far as sticking to the tomatoes and producing a crispy crust, but a mixture of regular cornmeal and flour should work fine.  One cup total of the dry batter was enough to cover a heaping dinner plate’s worth of fried cherry tomatoes.

Pour a little buttermilk (or regular milk, I used buttermilk since it’s a little thicker and has a bit of tangy flavor) into a shallow bowl.  If you run out you can always add more to the bowl.

Dip the tomatoes in the buttermilk, then in the cornmeal mixture, shake off the excess and set on a plate to dry.  I found the most efficient method to be: chop a bunch of the little tomatoes in half.  Reserve one hand for buttermilk and one for cornmeal (so you can do several rounds without stopping to wash your hands).  With the buttermilk hand, pick up a handful of tomatoes and drop them in the milk.  Stir to coat and then drop them into the cornmeal mixture.  With the other (cornmeal) hand, scoop cornmeal on top of the wet tomatoes, stir them to coat, shake each one gently and put it on the plate.  I was a little worried about the batter not sticking to the skins of the little tomatoes, but for the most part it worked just fine.

If you have big tomatoes, slice them fairly thin (between a quarter and half inch thick is good).  Dip each slice in the buttermilk and then in the cornmeal, turning to coat.

To fry: heat 1/4 -1/2 inch of oil in the bottom of a heavy pot or skillet.  I like to use my heavy-bottomed soup pot, since any splashes of oil stay inside it instead of all over everywhere.  Use an oil that can take high heat without smoking (I used canola).  Joy suggests heating the oil until a drop of water sizzles when you flick it into the pan.  I did a little research for a recommended temperature, and Southern Living (they should know) suggests 360-375° F.  I know from experience that having the temp too low can cause strange things to happen to your batter . . . anyway, when the oil comes up to heat, drop in as many tomatoes as will fit in a single layer.  Fry until one side is golden brown and crispy, and then turn them over and cook the second side.  When done, scoop the tomatoes out with a slotted spoon or strainer, shake off the excess oil, and place on paper towels.

These are best eaten warm, delicious with a little homemade mayo or ranch as well as just plain.  If that doesn’t make you hungry for some Southern food I don’t know what will!  Black eyed peas and cornbread . . .

About time for a post about food, don’t you think?

Although I haven’t had very many opportunities to cook on the road, we’re coming up on the part of summer where there is so much fresh lovely produce, it hardly needs actual cooking.  We found some local heirloom tomatoes last week in Maryland, although they are from the hothouse, they put me in mind of late summer bounty.

Bruschetta is one of those foods that doesn’t need much of a recipe, you can vary it infinitely to suit your taste and what’s available.  It’s also easy to present in a variety of ways; either everything mixed together to spoon on toast, or all the ingredients laid out for everyone to layer on their own.  If you are just learning to cook, it’s a wonderful way to experiment with mixing flavors and proportions.

I like the bulk of mine to be tomatoes, the fresher and more colorful the better.  Any size will work, bigger ones cut into smaller pieces will make the bruschetta more juicy than baby tomatoes cut in half.

I also like a lot, a lot of basil, it’s one of my all-time favorite favors.  When we rented in Madison I would get a few little basil plants at the farmers’ market in the spring and keep them going though the season.  If I’m mixing everything together, I stack the leaves, roll them up, and slice the roll into strips to sprinkle in.  If you are setting things out buffet-style, whole leaves are fine.

This is tasty with cheese, but don’t feel limited to mozzarella!  Try any kind you like, or what’s locally available where you are.  My favorite recent find was a goat cheese with the soft texture of brie.  I like not too much cheese, not to overwhelm the tomatoes, but of course you can vary it.  A soft cheese will blend more with the other ingredients, especially if you mix it all in a bowl.

A little olive oil, balsamic vinegar, salt and pepper will really bring the flavors together.  You can set them out if you are doing make-your-own, and drizzle them on top.

A feast so simple to make, you can enjoy it in your hotel room.

Here’s to the coming joys of summer!