The other day I was making fabric straps, and the time came to turn them right side out.  I never bought one of those proprietary tube-turning things, and I don’t do this very often, so usually I just tie the seam ends to a blunt needle and slide it through the tube bit by bit.  It’s kind of a pain but it usually works.  However, on this day my studio was somehow completely devoid of blunt needles.  I don’t know where they went, but I suspect karma is involved, since I always tell even my knitting students to buy sharp ones for burying ends.  I tried it with a sharp one, but that was clearly the wrong idea, of course the needle point kept piercing the inside of the tube.

After stewing it around in my brain for a while, I remembered that I had some millinery wire left over from another project.  I twisted one end into a loop, tied the thread ends to it, and pulled it through – viola!  Then I tried it with beading wire, which is much thinner and more flexible, but also worked just fine.

This is why we invented pliers, so you can make a loop smaller than your finger.  You may need to squash the loop flatter with the pliers to get it to be narrow enough to go through your tube. 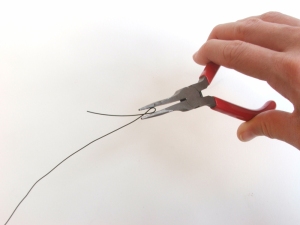 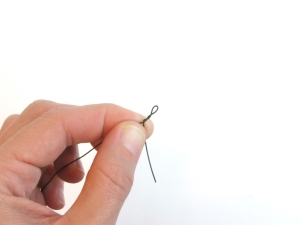 Twist the wire around itself – it’s more secure if you twist both the end and the main wire around each other, not just one around the other.

Cover the pokey wire end with some tape to keep it from catching on the fabric  – I used artist’s tape, electrical tape or painter’s tape should also work, duct tape is too gooey. 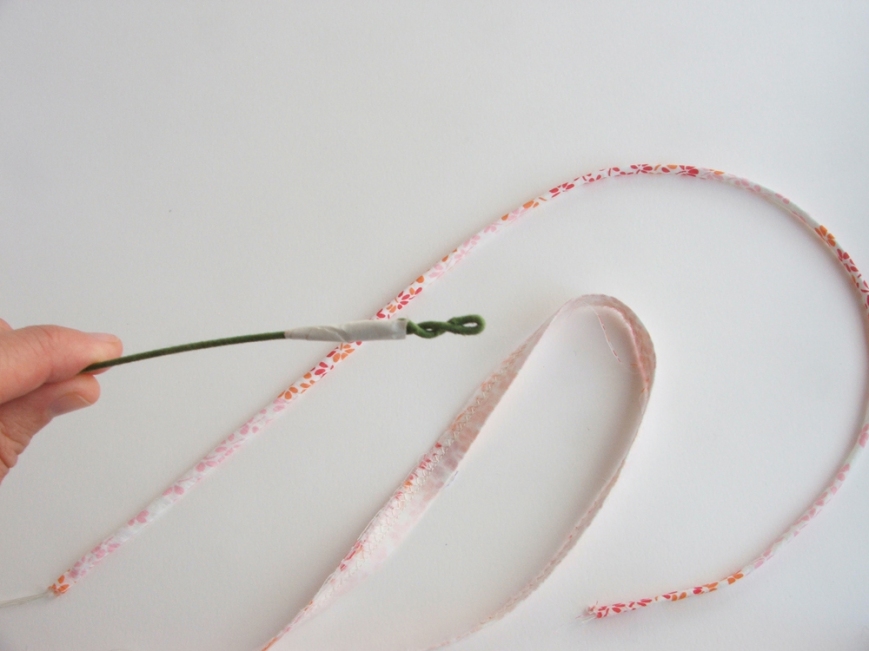 Ok!  Slide your new wire tube turner inside your tube.  Take the ends left from sewing the seam and tie them securely around the wire loop.  If your knot is not secure it may pull out part way through the turning process – terrible!  I pushed two thread ends through the loop one way, and two through the other way, and tied them in several square knots on top of the loop.

Pull the wire into the fabric tube, and the tube should start to turn inside itself.  Sometimes it’s a bit hard to get it started, you can try using your finger nails to pull the scrunched up fabric over the end. 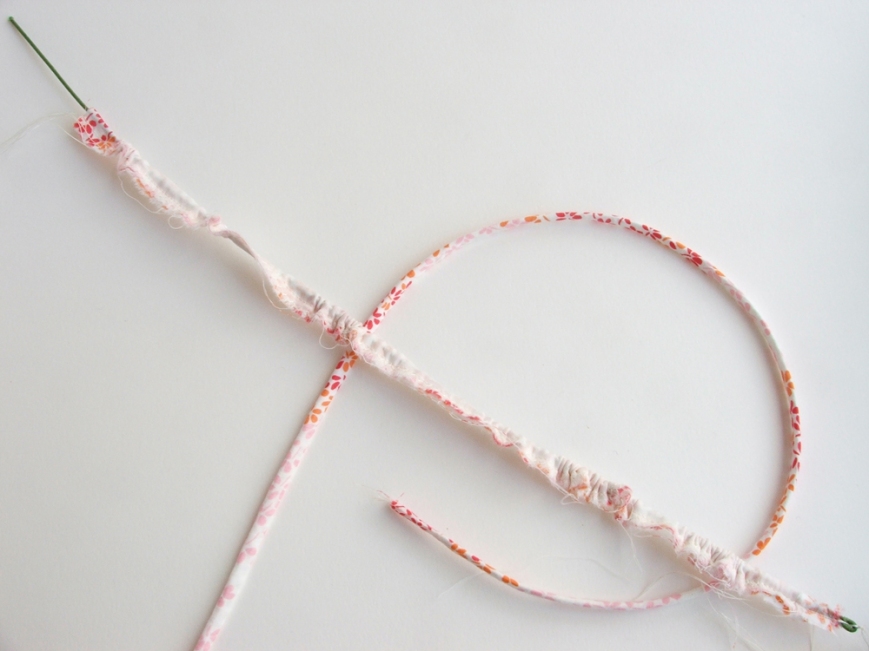 General tube turning tips:  Don’t get so much fabric bunched up right where the tube is turning that it gets packed in and won’t turn.  If you get stuck, back the bunched up fabric away from the end and try moving a smaller amount through the turn.  Pull on the wire threader and the turning point, stretching a bit can help.  Once you get going, pull on the fabric end inside the tube instead of the wire, so there’s no danger of the thread breaking. 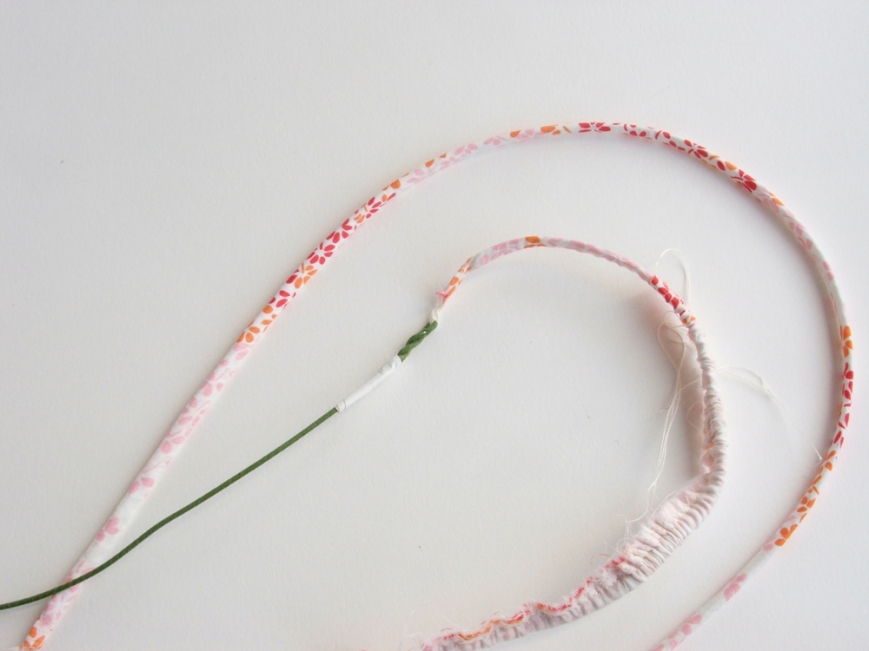 It’s much easier if you have a slippery fabric!  Mine at the moment is two layers of cotton, not slippery at ALL, but it still worked without too much fuss.  I wanted my straps to be as thin as possible, the limit with this fabric was a 1/4″ seam.  With a slipperier fabric smaller could work, keep in mind though that you have to have enough seam allowance so that your finished tube won’t unravel, and that seam allowance has to fit inside the finished tube!  I zigzaged over my SA since I absolutely do not want to take my dress apart later due to straps coming apart.

What am I making with these tubes anyway? A sundress!  I took this picture on Sunday during our giant spring snowstorm, which is now melting like crazy.  Whatever the weather says, it’s time for spring/summer sewing!  I used the fabric tubes for the straps, and also button loops at the top.  I’m glad to have my new wire turner, I can make some more straps for tops and dresses for the upcoming season.

Here is my sketch of the finished sundress.  I haven’t decided whether to do the big patch pockets or not. 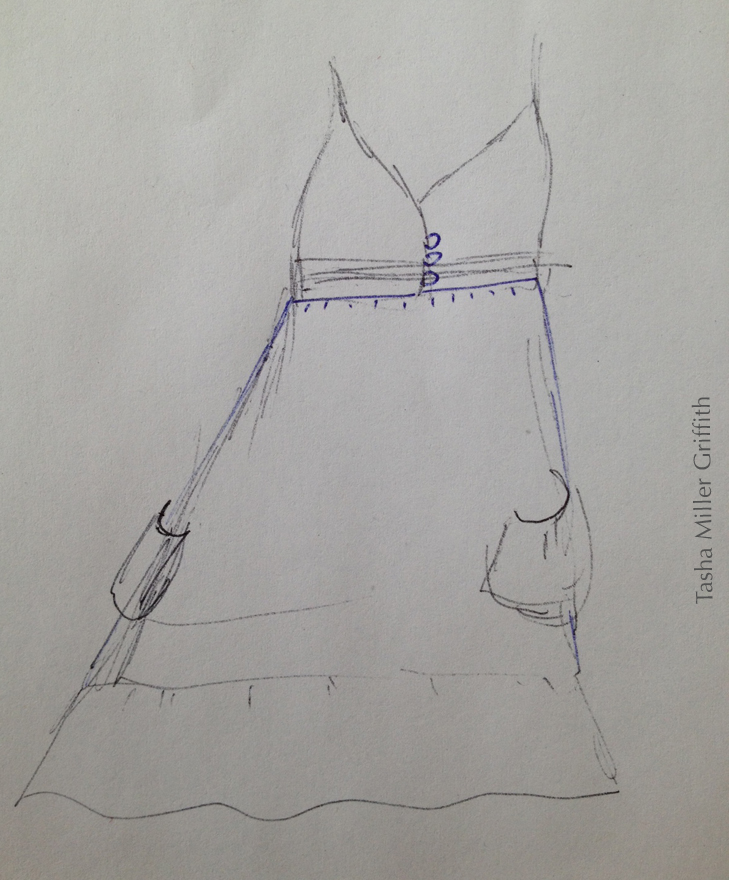 What do you think?  What are you making now?