Not as much as I would have liked.  But, contrary to the impression you may have gotten from this space, I did squeeze in a little sewing for myself the last time we were home.  When we leave the truck somewhere in art show land (otherwise known as the Midwest) and fly back home to get some r&r (or maybe embark on some crazy giant new project) I leave a bunch of my summer wardrobe out there.  This last time, I kind of did it to myself on purpose, packing even fewer of my summer tops than I reasonably could have fit in my luggage, hoping that it would motivate me to sew some new ones.

First, I finished a top I had been working on during the visit home before this one.  I wear a lot of tank tops in the summer, and I have been thinking about how to make some woven ones as well as the usual knits.  This one is a copy of a silk top, the cups of which I found flattering and comfortable.  During Me Made May, I fell in love with linen all over again, specifically this one mm green linen skirt, which is getting to the super soft and drapey stage of life.  I had this natural linen leftover from a long-ago project and thought I would try it out. 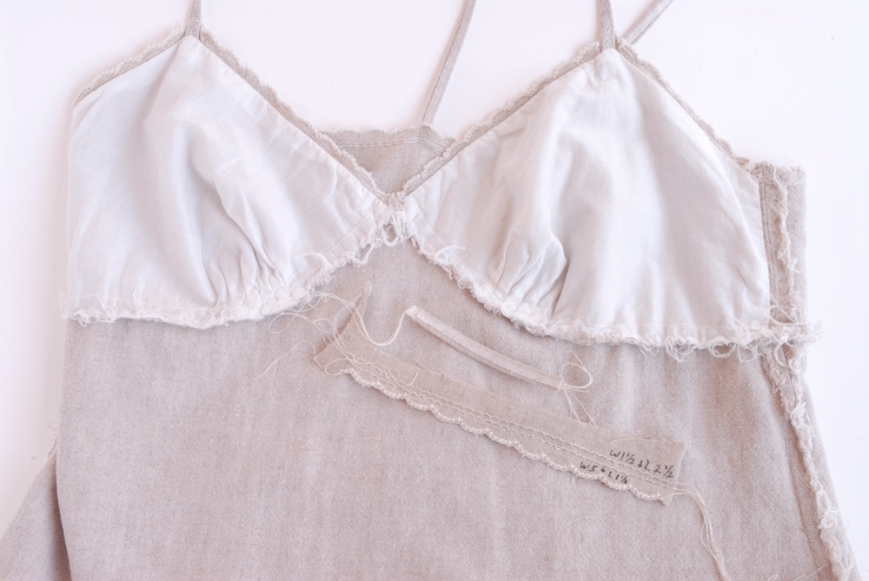 I lined only the cups, with thin soft cotton, catching them in the midriff seam and folding under and hand sewing the other sides, I like how it came out.  The original top has a scalloped satin stitch on the edges, and I decided to try something similar.  I also had some thick linen thread which I loved with the fabric, but no amount of coaxing and bigger needles would convince my machine this was a reasonable thing to work with, so I ended up using a narrow zigzag to hold in on the surface.  Both of the edge treatments are softer and more subtle after a few washings.  I made the straps using a thin piece of fabric from the selvage edge, wrapping it around a thin ribbon. 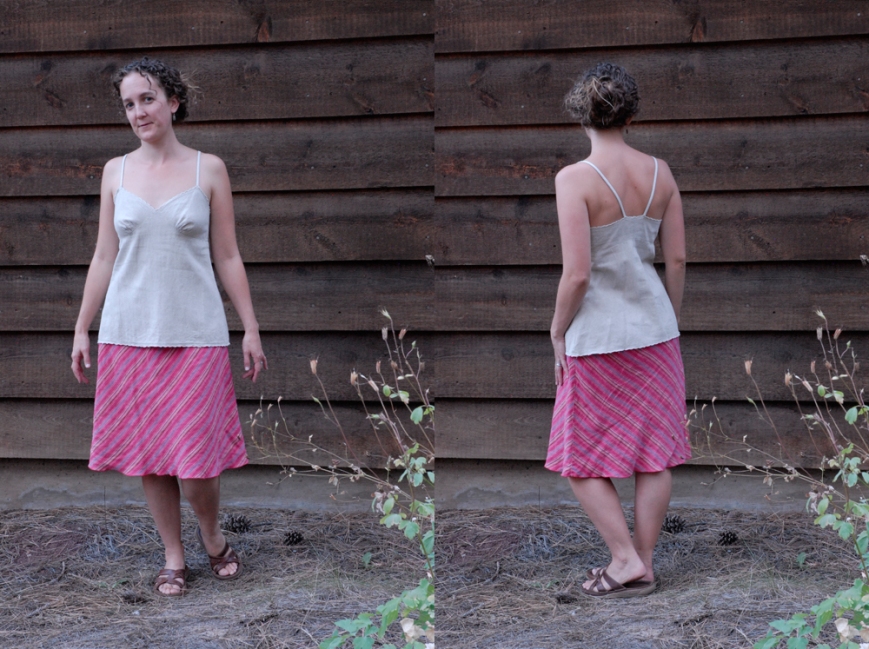 I wanted to make sure it came out long enough, and I may have overdone it, but the tunic length is working alright so far.  Funny how I don’t notice things in the original (like the back riding up) until I copy it.  Sigh.  I’ll also check out the front wrinkles before I make another one.

Next, I pulled out some pink knit leftover from another top to make a tank for yoga, of which I desperately needed more.  I had some narrow fold over elastic in my stash which should have been perfect, but for some reason every step of this project fought me tooth and nail and used up WAY more of my precious sewing time than was reasonable for something so simple and small!  I ripped a lot of seams.  I tried adding a self-fabric section for the hem which absolutely refused to look decent with any type of stitching.  Plus, when I tried the top on it seemed too tight and clingy, and I already have one round of tops made from this pattern (a heavily modified Kwik Sew 3524) which are NOT too tight and clingy!  Finally I realized that if I ripped the stitching from the little bit of elastic I had used as a test, I would have just enough to put around the bottom as well.  Which I did, and without even trying it on again, put it in my closet and wore it to yoga the next day (keep reading for a picture).  The top stitching on the elastic is beyond wonky.  But I needed it, I made it, and I was wearing it, and some days that just has to be enough.

After that, I made a pair of dainties, partly because I didn’t have much time left and they were cut out already, and partly to prove that my beloved Bernina and I do actually have a good relationship with knits.  Which in fact we do. 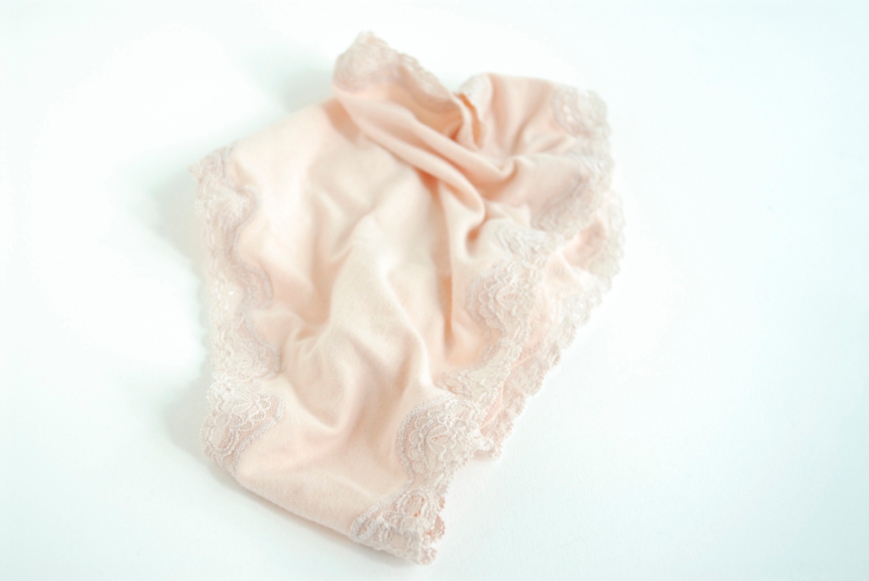 On our “real” return home for the fall a couple of weeks ago, I decided to make one more tank top before moving on to fall/winter sewing. I had a tee shirt with a hole in it that I had been meaning to convert into a wearable top for ages.  Unfortunately, it was cut so far off the grain of the knit that I couldn’t just use the the original hem, as Zoe suggests, and I had to cut the back and front shelf liner in two pieces each to get them to fit.  But I did use white top stitching, which I liked on the original shirt. 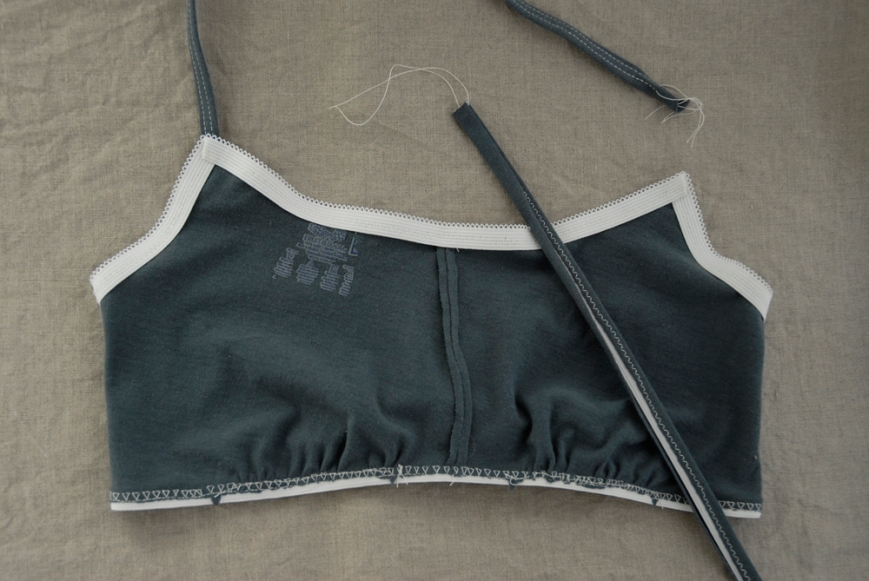 I liked this picot edge elastic, but it was not exactly soft, so I sandwiched it between the layers, sewing it to the liner first with a zigzag, and then the top layer with a twin needle.  For the straps I used a similar idea to the ribbon wrapping, but using plain elastic, zigzag, and the twin needle again.  This time everything went smoother, and start to finish, including experiments, took less than three hours.  That’s more like it!

See me being all zen about the pink top.  See how much clingier AND drapier it is than the blue one?  Crazy fabric difference.  I checked and the previous versions have stretched out with wear as well.  I might make the next one just slightly wider to start with.

Next up for my sewing, pants!  What are you making for the coming season? How do you figure out what fabric will do before you sew it?  I’m, um, still figuring that part out apparently. . .

7 thoughts on “Half My Wardrobe in Detroit, and What I Did About It”