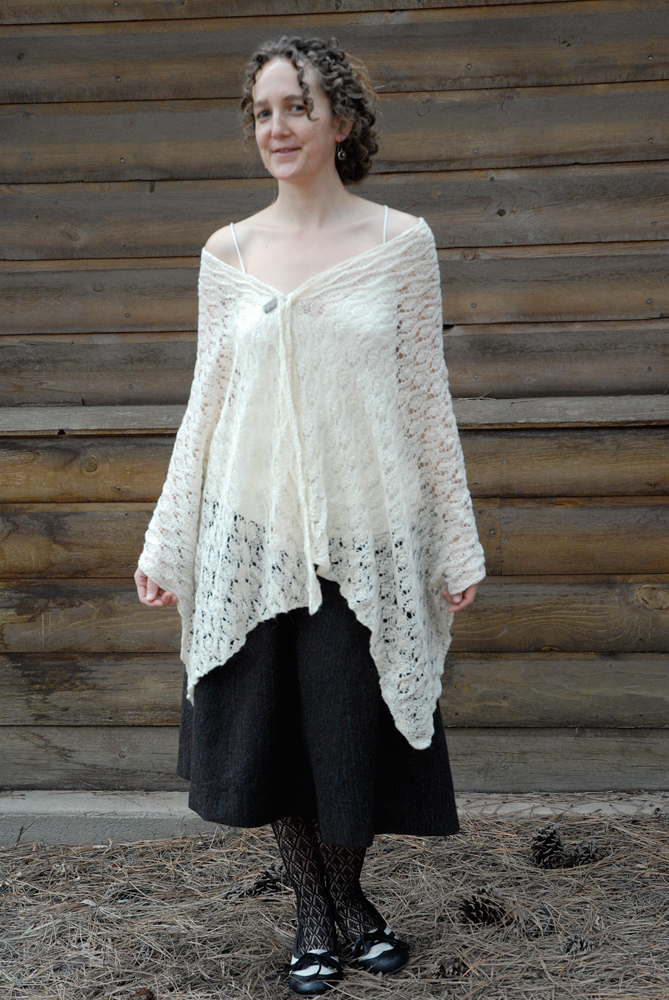 At one point, I considered not writing this post at all, because I’m pretty embarrassed about how this skirt got to the point where it needed remodeling in the first place.  But in the end, there was no way to not write about it, especially since I ended up wearing this once-shameful skirt to dressy Flagstaff event (maybe the only dressy Flagstaff event? We always joke that people here wear jeans to everything) . . .

I made this skirt, as near as I can figure, about 10 years ago!  This was a time before I knew much at all about wool, other than the basics; it comes from sheep, it’s been used since ancient times, people say it’s lovely, etc.  It may be worth pointing out that this was also years before I had felted anything, on purpose or otherwise.  You probably see where this is going.  I put a sample of the fabric though a normal cycle in the washing machine.  Nothing happened, the fabric looked just about the same as when it went in.  “Great!”  I thought.  I made up the skirt using the Folkwear Walking Skirt pattern, one I love and have used a lot.  And, I continued to wash it in the machine.  It never went in the dryer, thankfully, or what happened next probably would have been a much shorter process.  As it was, the fabric continued to look like nothing happened, for many years, for dozens and dozens of washes.  But eventually, all that agitation inevitably started the fibers felting together.  By last winter it was impossible to ignore. 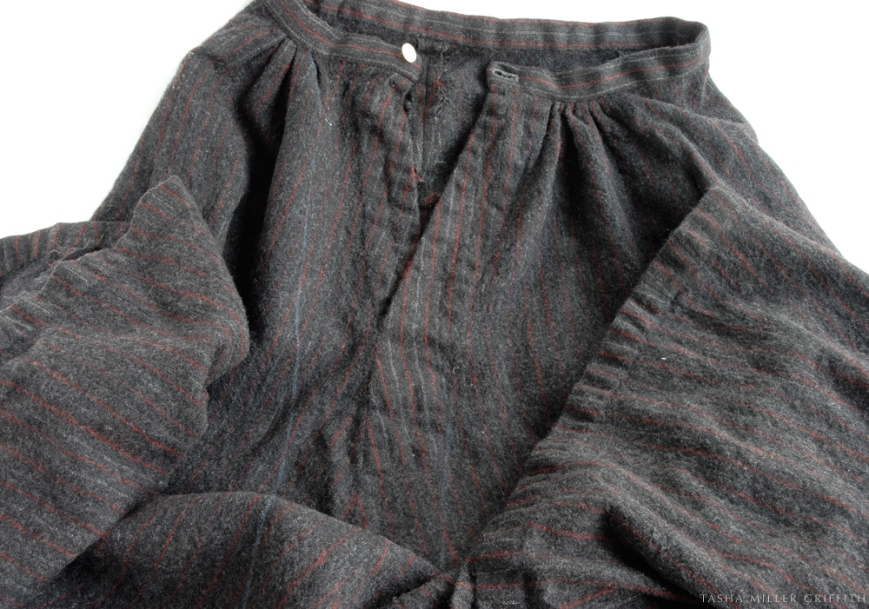 Since I now know quite a bit about felting, once I could look past my obvious horror since I had ruined some lovely fabric, I found it fascinating that the places on the skirt where small parts of the fabric were stitched to each other (the waistband, hem, and back placket) were still unfelted, while the big skirt pieces were noticeably felted, thicker and fuzzier.  Actually, it was the contrast between the two parts that made the skirt look weird, especially the unfelted hem, which looked almost gathered against the felted skirt.  My current theory is that since the hem and placket fibers couldn’t move as much, they couldn’t interlock to felt like the others did.

The skirt sat in my to-fix pile until I figured out a plan, actually a pretty simple one, which I think is essential to not spending inordinate amounts of time remodeling something.  I would cut off the not-as-felted hem, waistband, and placket, fit the remaining felted skirt to a wider and lower waistband facing, make a new placket, and re-hem it.  Above you can see my chalk lines for what to cut in the back, I continued the line of the wider side of the placket down to the hem, and cut a symmetrical amount from the other side of center back, to keep the back pieces the same size.  I got little pieces of felted fabric to use for my new placket from the extra cut off below the old placket. 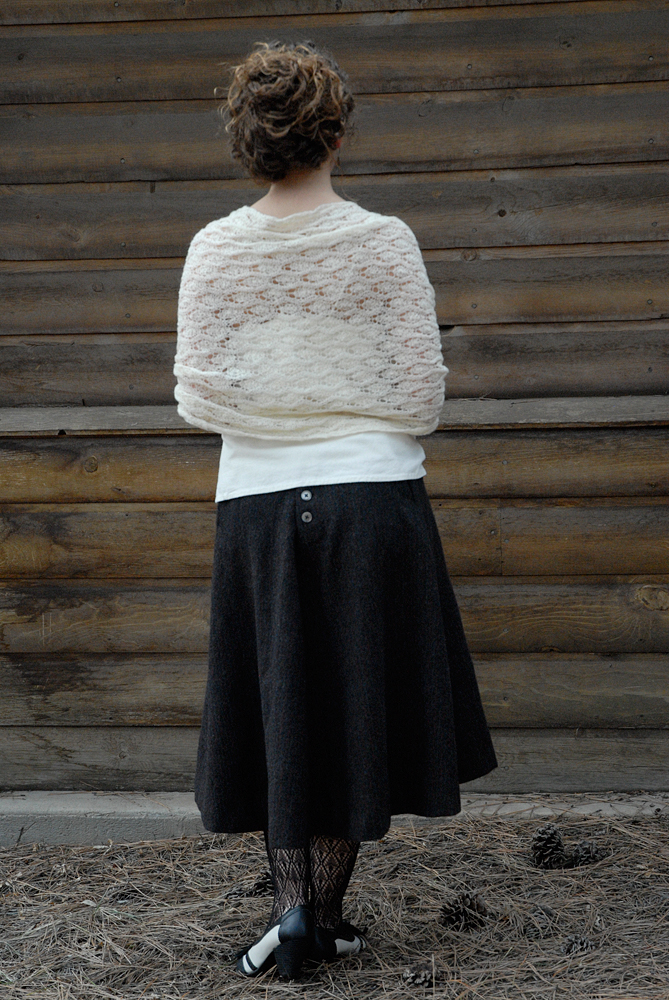 While I working on this project, I was also trying to figure out what I would wear to the Viola awards.  They’re Flagstaff’s yearly art and science awards for teaching, exhibits, and community outreach, and they throw a big Oscar-like party to give them out.  Bryan was nominated for one this year, for the exhibit of his In a Big World Wandering work, for which we also made the giant silk cyanotype.  I’d never been before, and I wondered what would everyone wear, what should I wear, should I borrow something, is it more like a costume party, should I wear something shiny?

I am not a shiny person.  In the end, I decided not even to go to my friend’s and try on formals to borrow, but instead to wear something that reflects who I really am.  Not only that, but I realized I could actually wear the lovely tailored skirt I was working on – if I went ahead and finished it!  I took the photos of my outfit right before we left, and I think you can tell I was pretty thrilled with my decision.  If what we wear tells everyone we meet a lot about who we are and where we stand, shouldn’t it be even more important, at an event where people are actually paying attention to my clothes, for me to wear something that shows my values and my heart? 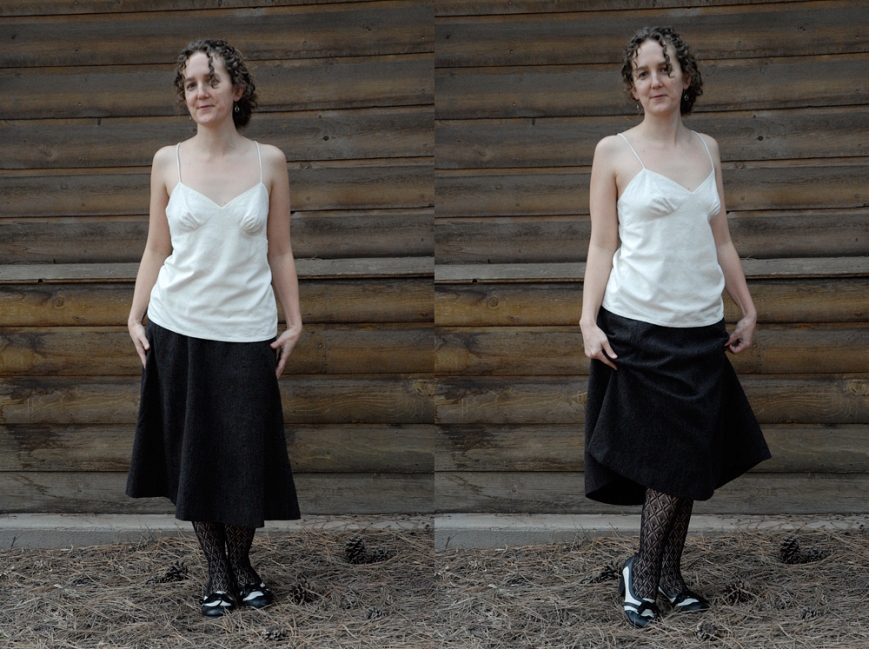 So I wore the rescued skirt, in it’s newly tailored glory!  Note the buttery folds.  And a nubbly cream silk tank top I made to wear to a wedding last year (same copied pattern as this linen one) which has proved more useful than I thought it might.  The shawl is something I started knitting for our wedding, realized would never be done in time, and eventually finished later.  (It’s a longer and wider version of the Fiber Trends Cocoon Lace Wrap, in a wool/alpaca blend lace weight yarn.)  It’s drapey and surprisingly warm, enough to keep me comfortable outside while I took the photos.  The pin holding it closed was my grandmother’s.  I didn’t make the tights or shoes, but I still love them . . . topped off with my winter coat, and I felt like I had stepped back to the ’40’s.

Proof that we went and I wore this outfit!  If you are curious what others wore, or what the event looked like, there are lots and lots more photos on the Facebook page for the organization.   We didn’t win (Bryan’s photo exhibit was up against the opening of the Discovery Channel Telescope!  And the winner, a recycled art exhibition that’s been going strong for 10 years here) but it was a really fun party, and I got lots of compliments, especially on the shawl. 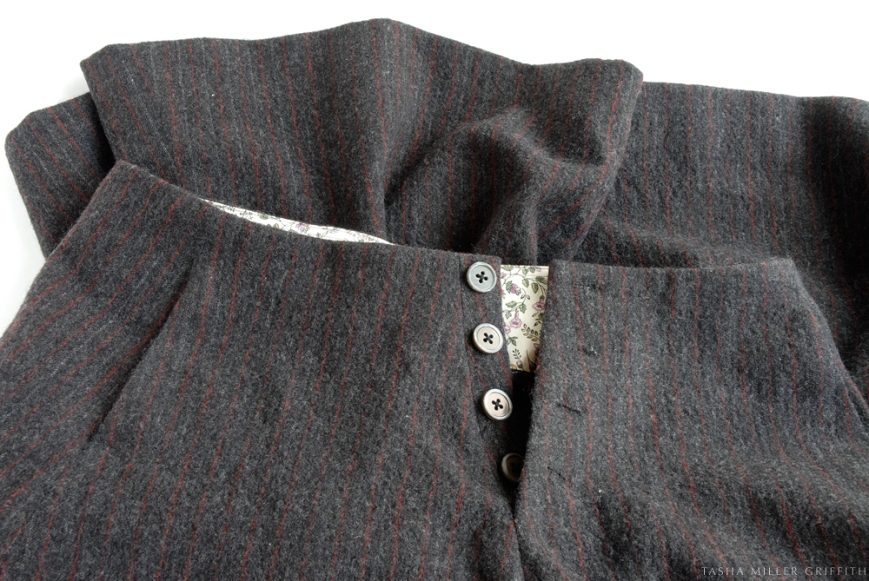 But back to the skirt, and I might as well confess one more thing, I feel slightly guilty but I can’t help it; I like this fabric more now than I did in it’s new/intended state.  It’s so soft but with so much body, and it tailors like a dream.  In fact, making the new placket and waistband gave me the itch to sew with wool again, it’s just a pleasure to work with.  This has got to be the flattest-laying, easiest-pressed-in-place placket I’ve ever made.  And the buttonholes – I made them by hand with a single strand of waxed black cotton sewing thread, and it was as if I sealed the cut edges with a magic wand.  Not only can you not see the stitches here, I couldn’t see them in my studio while sewing in broad daylight.  Note the pockets!  Another benefit of me-made formal wear. 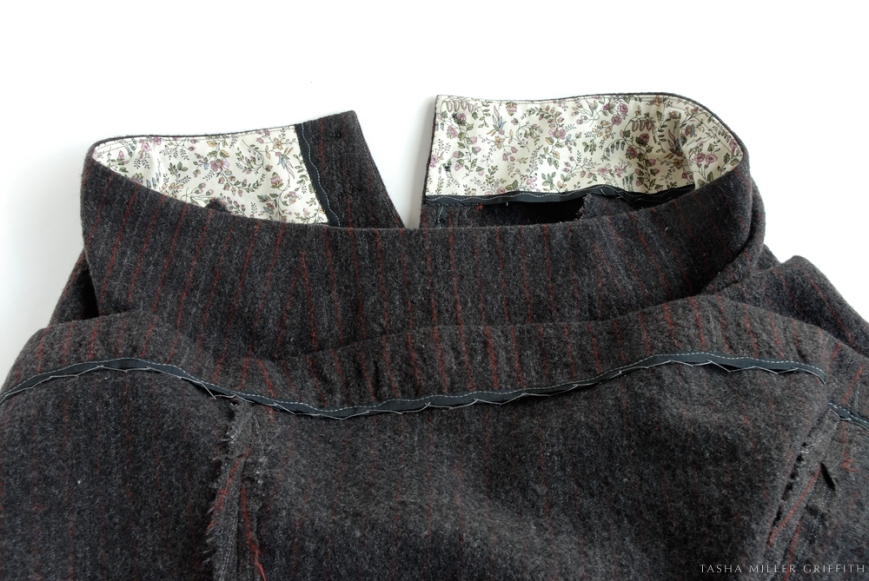 I also thought about how much I’ve learned in the last ten years.  I was able to add several refinements to this second round of the skirt, including using rayon ribbon on a lot of the edges to reduce bulk, adding a contoured waistband that fits my figure, and using catch stitches to secure the hem and placket so they wouldn’t show from the outside.  Now that it’s on a strictly hand-wash-only plan, the new and improved version should last me another ten years at least! 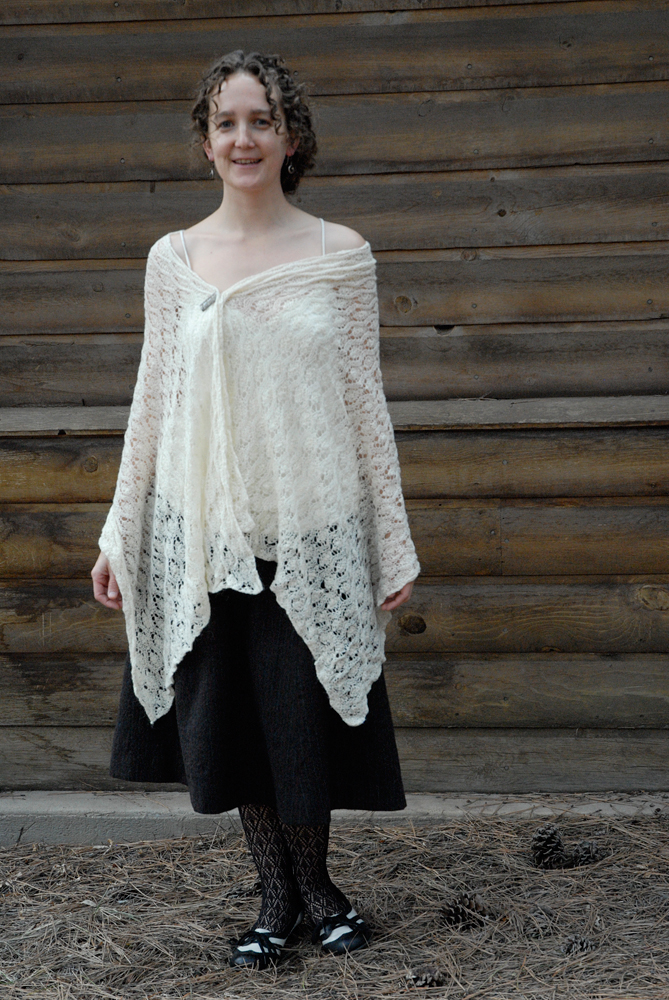 Morals of the story: please wear your heart on your sleeve, especially to formal events.  Sometimes a silk purse is lurking inside the sow’s ear of your mistakes.  And people please, no wool in the washing machine!

5 thoughts on “All’s Well That Ends Well, but Please, Don’t Put Your Wool in the Washine Machine”