You may have noticed that I’m not big into bandwagons, and if I am going to jump on one, I like to wait until it’s safely parked back in the barn and everyone else has left first … I actually bought a copy of this pattern right when it came out and it seemed like everyone in my sewing-internet-world was talking about it, but then in more my typical style, I decided to think about it for quite a while before actually making it. 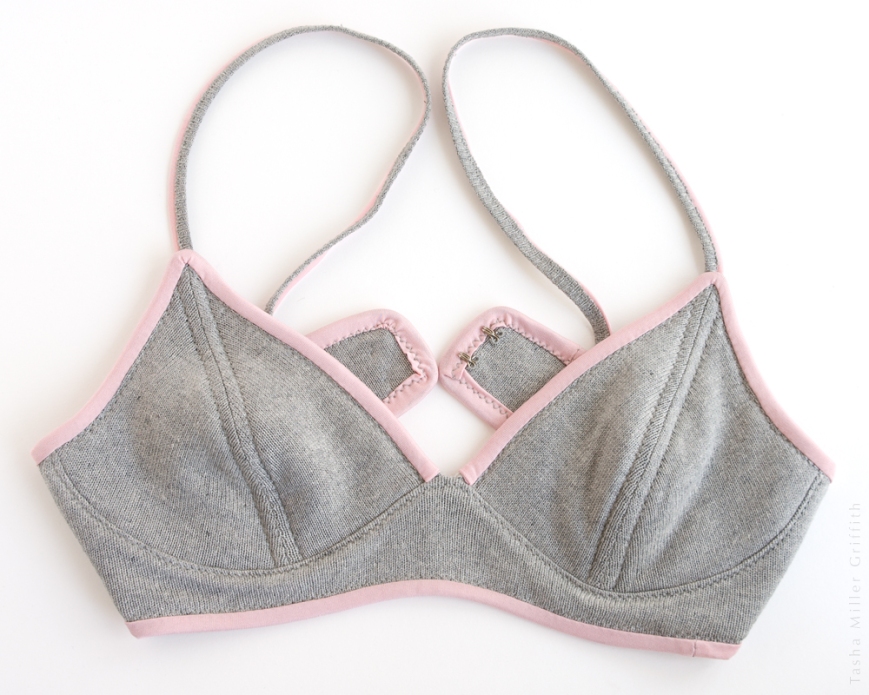 What was/is really exciting to me about the Watson Bra pattern is that someone else already did all the hard work of figuring out the exact curves of each piece to make a smooth cup shape, make it fit into the band, etc. (thanks Amy!), and that it’s specifically designed to be made without underwires, which is exactly what I wanted.

What I was less excited about is the fact that it called for mainly synthetic stretchy stuff; lots of kinds of elastic and power mesh, etc. As you may also have noticed, I’m so over it with all of that, and I’m trying to use all natural materials whenever it’s even remotely feasible. And one of the things that kept popping into my head whenever I looked at all this cashmere felt I have around* was, “this would really be perfect in a bra!” Since you know, it’s substantial but flexible, and insanely soft on the skin. But could I really make a bra using all natural fabrics? Maybe without even elastic?

It turns out the answer is a resounding yes! Not only can it work, but it did work beautifully on the very first try (some luck involved). Using my measurements of approximately 31 ½” underbust and a 1” difference between full and upper bust, I decided to make a size 34A, erring on the side of a slightly smaller size since my materials weren’t super stretchy and I didn’t want it to come out too loose. I made a couple of alterations to the pattern; adding ½” to center front since I knew that would fit my frame better, and straitening out the bottom line of the band to allow for the possibility of using an existing hem when upcycling garments for fabric (although I didn’t do that this time). I also added to the seam allowance in the center of the outer cup pieces, so I could grade it with the inner seam allowance to avoid a noticeable ridge there. 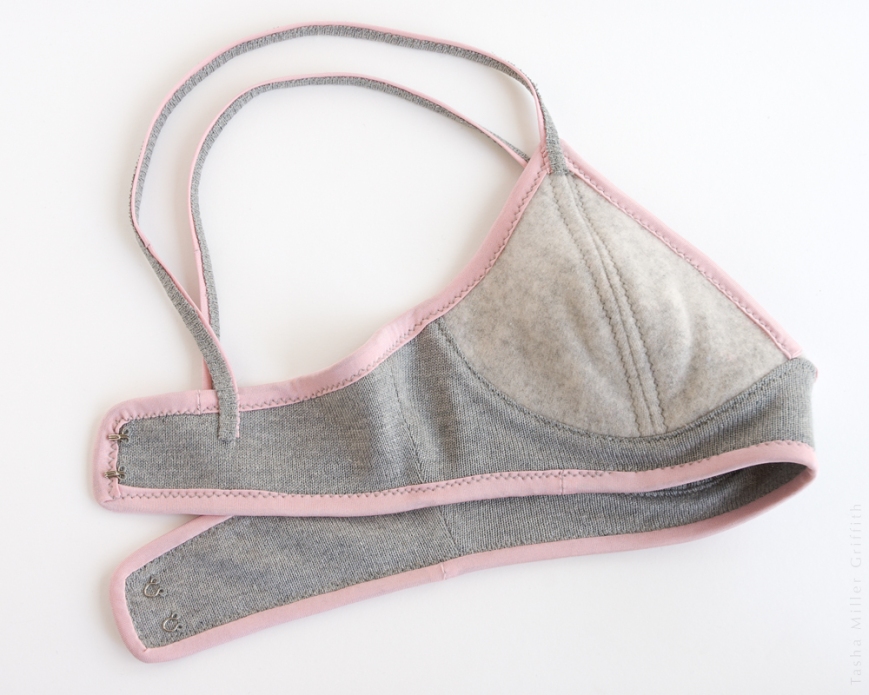 The grey fabric is from a silk knit top that had worn out around the underarms and cuffs but still had plenty of life in the body. The pink binding is leftover fabric from making these camis (very thin silk knit), cut 1 ½” wide, sewed ¼” from the edges, and turned under. And the inner cups are indeed felted cashmere scraps*—oh yeah! I sewed it all together with a simple zigzag stitch, and sewed the straps on by hand.

According to my notes I made this back in February, which means I can now safely report that it works as well in real life as I’d hoped. The only alterations I’ve made since then are to move the back attachment point of the straps closer to center back (typical for me if the straps are slipping off my shoulders at all), and to tack down the bindings at center front with some tiny hand stitches, since the edges pulled up a bit after a few wears and washings, revealing the cup layers. 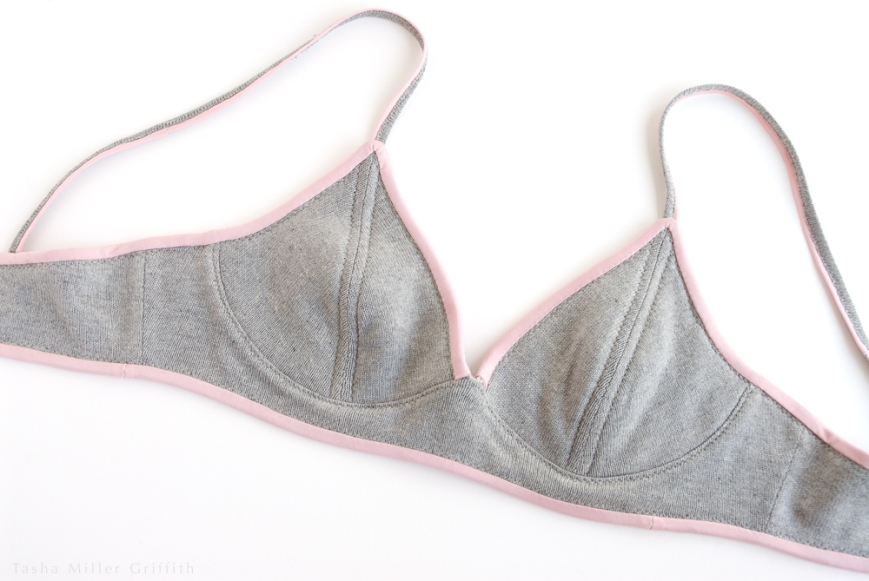 I thought this might be a wearable muslin version, but instead it came out near perfection in fit and function. It does everything a want a “real bra” to do: provide a smooth and socially acceptable silhouette under a single other layer of clothing, and add a little bit of support. It’s also so comfortable I forget I’m wearing it, which is key for me. I thought about making another one (I even have another old silk top or two with some features that might be really fun to incorporate) but the truth is I don’t need it right now. This one, plus my more bralette-type past attempts at upper-body lingerie, are covering all my wardrobe needs. So, I’m officially checking “make real bra” off of my bucket list goals, and moving on!

I’ve been thinking a whole lot about what it means to have “enough” as I get closer to actually filling the gaps in my wardrobe. This post by Felicia has only broadened my sense that this is a really important thing for us all to be thinking about. A whole post about it here is likely coming … I’d love to know your thoughts at any time. 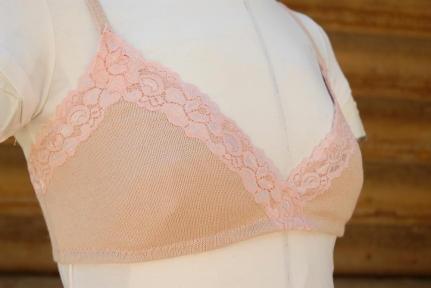 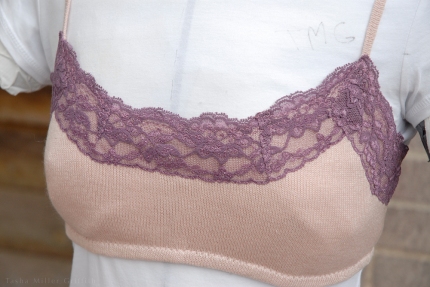 *Thanks to all the Fiddleheads hats I’ve made over years now, I have an entire giant plastic bin of small bits of luscious felted cashmere knits, which I could never throw out despite the fact that there’s way more than I’ll use in one lifetime (—don’t even think about that, self!). Which is why I’ve started sorting them into groups of pleasing colors and offering them to fellow makers in my Etsy shop. I’ll continue to sort and list more batches as they sell. If you’d like some and you have color requests, just give me holler, here or there!

Hello everybody, it’s been a little while! I’m a firm believer in blogging whenever you can and feel inspired, not on a pre-ordered schedule, and I also think that most blogging apologies are a waste of time and just make you feel bad. Still, it’s been much longer than I meant it to be, and I’d like to echo Molly’s sentiments on Orangette: if I ever decide to leave this space for good, I’ll tell you so. It seems only fair. The way she puts it at the end of that post is so good.

The first reason for my losing track of online things was one of the better ones: for the second time ever, we hosted our annual family and friends craft retreat at my house last month. The first time we hosted it, two years ago, was when I had an inspiration—the infinite to-do list—that started a big difference in my thinking.

I have to say, I was pretty proud of myself this time. I felt calm and relaxed in the lead-up, and I even slept well before and during at least the first part of the week—proof that I’ve made progress as a human lately, and let go of some anxiety, even the good kind that’s more like excitement. (If you need this too, may I highly recommend the book The Three Marriages by David Whyte, which is full of deep insights about things in general, and came into my life at exactly the right time. You can also listen to a good interview with him from On Being.)

It was one of those times when being calmer and going slower actually ended up meaning that I got more done. We cleaned off the back porch, for instance, which probably hadn’t been done in the two intervening years …

And I made a new shower curtain! Well, “made” might be exaggerating somewhat. I took a length of wide fabric, hemmed it, installed some grommets, and there we go.

I’d like to apologize to all of our previous guests for the old shower curtain, a cheap vinyl thing with one ripped eyelet, which someone bought right as we were moving into our house a decade or so ago, and had been there in various states of nastiness ever since. Incidentally, I also figured out that if I actually took the vinyl thing down, soaked it in the tub with vinegar and dish soap, and took a scrub brush to it, it came out clean—enough better that I decided to save it in case I need a waterproof something.

Back to the new curtain though: I’ve been slowly moving more and more away from synthetic materials and towards natural ones for all kinds of reasons. I got another push that way when I found out that polyester and nylon clothes shed tiny synthetic fibers in the wash which eventually find their way into the oceans, enter the food chain when they’re eaten by small critters, and never break down. I first heard about this on Science Friday a while back (but cannot now find the specific program). It came up again recently on Root Simple. This was one of those last-straw moments. I’m convinced, I’m done with that, and I’ve been trying harder not to buy any synthetic fabrics.

So I wanted a natural fiber shower curtain, and as I was looking for one and researching options, it occurred to me that I had in my stash some wide cotton fabric which was basically what I was looking for—lightweight but tightly woven. And with stripes!

I measured the old curtain to figure out what length would work best (a little shorter than standard turns out to be good for my tub) and if one width of the fabric would be enough (it was, but you could always add a seam if not).

I made a deep hem on the bottom, and a narrower one at the top. The hardest part was hammering in the grommets. Typically for me, I liked the “wrong” side of the fabric better since it’s a little more textured and subtle, so I put that on the outside. 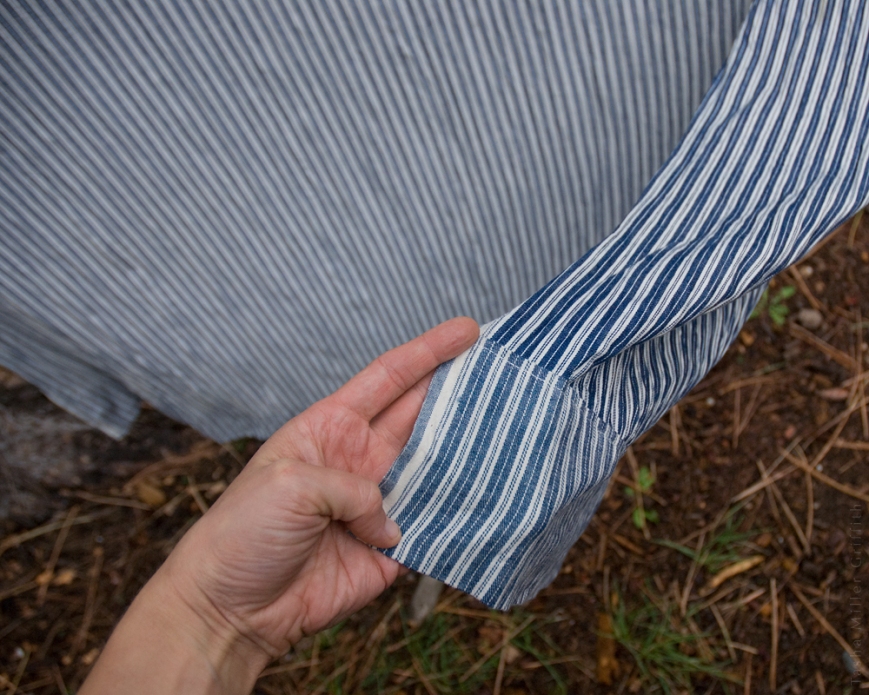 I had a few questions, but figured it was worth trying to see what would happen. Would plain cotton keep the water inside my shower? Yes it did! Would a deep hem be enough to weigh down the bottom? It was! To be on the safe side as far as mildew, I’ve been wringing the curtain out after I shower, and then spreading it out as much as possible to dry. So far, it’s working really well, and it’s so much nicer to look at than the old one, it’s fairly ridiculous. I also like the idea that I can take this one down, put it in through the washer, and hang it to dry in the sun once a month or so, which should actually be easier than cleaning the vinyl one.

If you wanted a sheer curtain, or a liner for a more decorative fabric on the outside, I suspect that silk organza would be amazing (although I haven’t tried it, not having that much on hand). Something so thin but crisp and tightly woven should dry almost instantly, and look beautiful. Oh printed silk …

Anyway, I hope this give you all some ideas!

It feels good to be writing here, and I intend to do it again soon.